Štefan Kocán was born into a music loving family in Trnava, Slovakia. He studied classical voice at the University of Music in Bratislava. Possessing a wide vocal range and stage presence beyond his years while still in school, Štefan sang the complete roles of Don Giovanni, Dulcamara and even Malatesta from L’elesir d’amore in the Bratislava Chamber Opera House. After completing his studies at the University of Bratislava, in the summer of 1998 Štefan sang in a master class given by the legendary Russian Bass Yevgeny Nesterenko in Piestany, Slovakia.
He approached the Maestro after the class to inquire about lessons, to which Nesterenko responded that he would gladly accept Štefan into his studio at the Conservatory of the City of Vienna. Following this agreement, Štefan auditioned and was accepted to the Conservatory of the City of Vienna and continued studying with Yevgeny Nesterenko. As his studies progressed, Štefan Kocán sang and placed fourth in one of the world’s most prestigious vocal competitions: The International Tchaikovsky competition.
After finishing his studies at the Conservatory, he then embarked on his professional career first in the Landestheater in Linz, Austria. With the company from 2002-2006, he sang leading roles such as Sarastro in The Magic Flute, Filippo in Don Carlos, Osmin in The Abduction from the Seraglio, Mephisto in Faust, Raimondo in Lucia di Lammermoor, Banco in Macbeth, Kecal in the Bartered Bride. For his interpretation of the Grand Inquisitor in Don Carlos, Štefan was awarded thee Eberhard Waechter Prize 2003 for Operatic performance of the year. During these years with the company, Štefan was heard in the roles of Filippo and The Grand Inquisitor by Ioan Holender, then the Director of the Vienna State Opera.
Holender was so impressed by Štefan’s rare Basso Profondo instrument and artistry, that he engaged him as a guest artist at the Vienna State Opera. There Štefan made his debut as Il Commendatore with Edita Gruberova as Donna Anna, and from 2004 until 2010 he went on to perform the roles of The Grand Inquisitor and Filippo in Don Carlos, Sarastro in The Magic Flute, Padre Guardiano in La Forza del Destino, Banco in Macbeth, and Raimondo in Lucia with Anna Netrebko.
Štefan Kocán was simultaneously singing principal roles at The Vienna State opera as well as Theater Basel in Switzerland from 2006 – 08, Solidifying his portrayals of Mephisto, Filippo, Osmin, and adding to his repertoire the role of Roi de Trefle in The love of three Oranges.
Following these successes came Štefan’s American Debut at the Metropolitan Opera as Il Re in Aida, under the baton of Daniele Gatti in the 2009-10 season. The following season Štefan made his debut at the Lyric Opera of Chicago as Banco in a new production of Macbeth, and returned to sing the role of Ramfis there the following season in Aida. Engagements with the Los Angeles Philharmonic followed in 2013, with Štefan singing the role of Il Commendatore in a new staged production of Don Giovanni and then as Ramfis in a concert version of Aida at the Hollywood Bowl, both under the baton of Gustavo Dudamel.
In the 2011-12 season, Štefan was invited to make his debut at La Scala as Masetto in the season opening production of Don Giovanni, featuring Anna Netrebko, Bryn Terfel and Peter Mattei. In the 2012-2013 season he returned to sing Banco in Macbeth with Valery Gergiev, and then in the 2013-2014 season sang The Grand Inquisitor and Filippo in Don Carlos. This Performance of Filippo in la Scala marked a remarkable over 50 performances of the role of Filippo during the course of his career since his debut in Linz in 2002.
Since making his Debut at the MET, Štefan has established himself there as an electric performer both vocally and physically. Since his debut, Štefan has returned to the MET every season performing as Sparafucile in the Otto Schenk production of Rigoletto, Ferrando in Il Trovatore which was broadcast live in HD, Commendatore in a new production by Michael Grandage which was broadcast live in HD, and Ramfis in Aida.
In the New Production of Rigoletto by Michael Mayer broadcast live in HD, Štefan received much critical acclaim for his sinister and compelling portrayal of Sparafucile. New York Magazine praised him as a “Gifted scene stealer with a voice that is a “Tectonic Rumble”. Štefan has made the Sparafucile in this production uniquely his own, and has reprised it in the 2013-14 season. He will bring his massively entertaining portrayal back to the MET in the 2015-16 season.
Also in the 2013-14 season, Štefan sang a critically acclaimed Gremin in Onegin, followed by Khan Konchak in the new production of Prince Igor by Dmitriy Tcherniakov, also broadcast live in HD.
As well as his achievements with role of Filippo in Don Carlos, Štefan has also sung the high stakes leading Verdian Basso roles such as Zaccaria in Nabucco at the Bavarian State opera in Munich in 2009, and Attila in Teatro Municipal de Santiago di Chile in 2012.
Štefan is a Laureate or the following competitions: the Antonin Dvorak international vocal competition in Carlsbad, Czech Republic, The Mikulas Schneider Trnavsky International competition in Trnava Slovakia, The Special Prize in the Belvedere International Vocal competition in Vienna, Austria, and in the Homage to Lucia Popp competition in Bratislava, Slovakia.
In addition to his opera career, Štefan is an accomplished recitalist and gives concerts and recitals in various music styles.

Mária Porubčinová is an excellent young Slovak soprano representing a high level of the Slovak vocal school. She studied at the Academy of Performing Arts in Bratislava in the class of Zlatica Livorová. She developed her talent also in masterclasses of the important singers (Magdaléna Hajóssyová, Naděžda Kniplová, Peter Dvorský) and participated in several international competitions – the International Vocal Competition of M. Schneider-Trnavský in Trnava, where she earned a prize for the best interpretation of works of Slovak composer, the Hans Gabor Belvedere Singing Competition in Vienna, where she went in the final round, and the Concorso Iris Adami Coradetti in the Italian Padua. In 2008, she was a finalist in the International Singing Competition Montserrat Caballé in Zaragoza, Spain, in 2009 was third at the International Singing Competition Hans Gabor Belvedere in Vienna and received the highest award, along with the price of the audience at the Competizione della opera in Dresden.
The stage debut of the young soprano was in 2005 in the title role in Dvořák’s Rusalka at the scene of Janáček opera in Brno. In the 2007/2008 season she sung in the State Opera in Banská Bystrica the role of the Wise women in the homonymous one-act opera by Carl Orff, and Puccini’s Suor Angelica, she also presented on the stage of the Opera of the Slovak National Theatre, where she subsequently performed the role of Katrena in Suchoň’s opera Krútňava and later the role of Mařenka in Smetana’s Bartered Bride (for which she received the Literary Fund Award and a nomination for the Slovak Theatre Award DOSKY 2009). From 2010-2011 worked for the Staatstheater Braunschweig in Germany, where she performed in the opera of A. C. Gomes Salvator Rosa and Mascagni’s opera Isabeau. In 2010 she participated on a guest trip with the Slovak National Theater to Cyprus, where she performed Mimi in Puccini’s La Boheme. At Christmas in 2012 she released with the guitarist Boris Bertók and the Hummel String Orchestra a Christmas CD called Silent Night.

She performed in the Czech Republic, Poland, Italy, Germany, Austria, the Netherlands and the USA.

Concert Hall of the Slovak Philharmonic 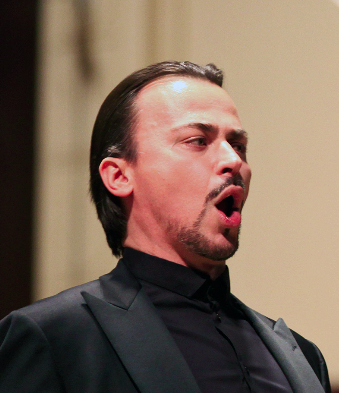 Or siam soli…
duett of Pater Guardiano and Leonora, act 2