Born in the small town of Piet Retief, South African soprano Pretty Yende has risen to the top of the opera world with unparalleled speed… With her magnetic charm, acclaimed operatic and solo performances worldwide, and a critically lauded discography, South African soprano Pretty Yende has quickly become one of the brightest stars of the classical music world.

Born in Piet Retief, Mpumalanga, Yende was inspired to learn opera at age 16 after seeing a TV advertisement that featured the Flower Duet from Lakmé. She subsequently enrolled at the South African College of Music. She also graduated from theAccademia Teatro alla Scala in Milan, Italy. Her younger sister, Nombulelo Yende, is also an opera singer.

Since making her professional operatic debut at the Latvian National Theatre in Riga as Micaela in Carmen, she has been seen at nearly all of the major theaters of the world, including the Royal Opera House, Covent Garden, Opéra National de Paris, Metropolitan Opera, Teatro alla Scala in Milan, Deutsche Oper Berlin, Staatsoper Berlin, Bayerische Staatsoper in Munich, Opernhaus Zürich and Gran Teatre del Liceu in Barcelona, as well as most recently Vienna Staatsoper.

This season – 2021/2022, Pretty Yende returns to the Wiener Staatsoper to star as her signature role of Violetta in Verdi’s La Traviata and as Elvira in Bellini’s I Puritani. She reprises Violetta at the Royal Opera House and will additionally perform the role of Norina in Donizetti’s Don Pasquale. At the Teatro di San Carlo, Ms. Yende sings Violetta in Ferzan Özpetek’s production, and she sings a recital with pianist Michele D’Elia at the house. Additionally, she stars as Olympia, Antonia, Giulietta, and Stella in Offenbach’s Les Contes d’Hoffmann at Palau de les Arts Reina Sofía.

On the concert stage, Pretty Yende makes her debut with the Philadelphia Orchestra performing songs by Richard Strauss under the baton of Yannick Nézet-Séguin. She joins a star-studded roster for Washington National Opera’s “Come Home: A Celebration of Return” concert, and she performs two concerts with the Parisian Frivolities, first at the Théâtre Impérial de Compiègne and then at Théâtre des Champs-Elysées. She will share the stage with tenor Lawrence Brownlee for a concert at the Carmen Würth Forum, and she will perform selected arias with the Bohuslav Martinů Philharmonic Orchestra. At the Wiener Konzerthaus, she joins soprano Nadine Sierra for a concert with the Slovak Philharmonic. This season, Ms. Yende will also make multiple recital appearances, including in Atlanta, Geneva, and Stockholm.

Yende made her highly anticipated house debut at Teatro di San Carlo performing in a special Mozart and Bel canto gala concert led by Giacomo Sagripanti. She also performed in the Metropolitan Opera’s “New Year’s Eve Gala Live in Concert,” streamed live from the Parktheater in Augsburg, Germany. Ms. Yende shared the stage with tenor Benjamin Bernheim for a recital with the Orchestre de chambre de Paris, led by Sascha Goetzel. Additionally, she returned to Paris for the annual “Concert de Paris” to celebrate Bastille Day.

In the 2019/20 season, Ms. Yende returned to Paris for two highly anticipated role debuts: Violetta in a new production of La Traviata by Simon Stone, and the title role in Manon, featuring a new production by Vincent Huguet. On the concert stage, Ms. Yende embarked on a solo recital tour, making stops at Oper Frankfurt, the Opernhaus Zürich, Smetana Hall in Prague, and the Barbican in London, and Carnegie Hall in New York.

Ms. Yende began the 2018/19 season with her return to Barcelona as Elvira in I Puritani. She returned to The Metropolitan Opera as Marie in La fille du regiment, and sang her first Leïla in Les Pêcheurs de perles, receiving critical acclaim from the New York Times: “In the role of Leïla, suppressed erotic longing is sublimated into pure vocalism lavishly ornamented with arabesques and grace notes.” Shortly thereafter, she appeared at the Opéra national de Paris as Norina in Don Pasquale, portrayed her first Amina in La sonnambula at Opernhaus Zürich, and returned to the Bayerische Staatsoper to sing the title role of Lucia di Lammermoor and as Adina in L’elisir d’amore.

Her rise into the global stage includes highlights from her acclaimed Metropolitan Opera debut, stepping in as the Countess Adele in Le Comte Ory; her role and house debut as Marie in La fille du régiment at the Teatro de la Maestranza in Seville; debuts at Opéra national de Paris as Rosina in Il Barbiere di Siviglia, the Gran Teatre del Liceu as Norina in Don Pasquale, with the Los Angeles Opera as Micaëla in Carmen, at Staatsoper Hamburg as Fiorilla in Il Turco in Italia, and her debut at the Theater an der Wien as Countess Adèle. Additional highlights include Rosina, Adina, the title role of Lucia di Lammermoor, Juliette in Roméo et Juliette, Elvira in I Puritani, Pamina in Die Zauberflöte at the Met; Adina at the Royal Opera House; Lucia at the Opéra national de Paris and Deutsche Oper Berlin; Adina at the Staatsoper Berlin; Pamina at the Grand Théâtre de Genève; Elvira at Opernhaus Zürich; Susanna in Le nozze di Figaro at Los Angeles Opera; Countess Adèle and Musetta in La Bohème at Teatro alla Scala; her role debut as Teresa in Benvenuto Cellini in Paris; and Lucia di Lammermoor in concert at the Cape Town Opera.

In 2016, she released her debut album “A Journey” for Sony Classical, and appeared as the musical guest on several television shows including “The Late Show” with Steven Colbert, “The Wendy Williams Show,” and “Good Morning America.” She released her second solo album titled “Dreams” one year later on Sony Classical, with Opera Now raving: “South African Yende has a delicious instrument, with a youthful quiver of passion to it, and a wonderfully secure technique.”

A 2011 graduate of the Young Artists Accademia of the Teatro alla Scala, Yende made her debut with the company in 2010 as Berenice in Rossini’s L’Occasione fa il Ladro. In 2010, she became the first artist in the history of the Belvedere Competition to win the top prize in every category and went on to win First Prize in the Operalia Competition in 2011.

Other prestigious awards include an award from the South African government ‘The Order of Ikhamanga in Silver’ for her excellent achievement and international acclaim in the field of world of opera and serving as a role model to aspiring young musicians and more recently being a recipient of the Italian Knighthood, Ordine Stella d’Italia for her work in building extraordinary relations between Italy and other countries, making her the youngest South African ever awarded this accolade. 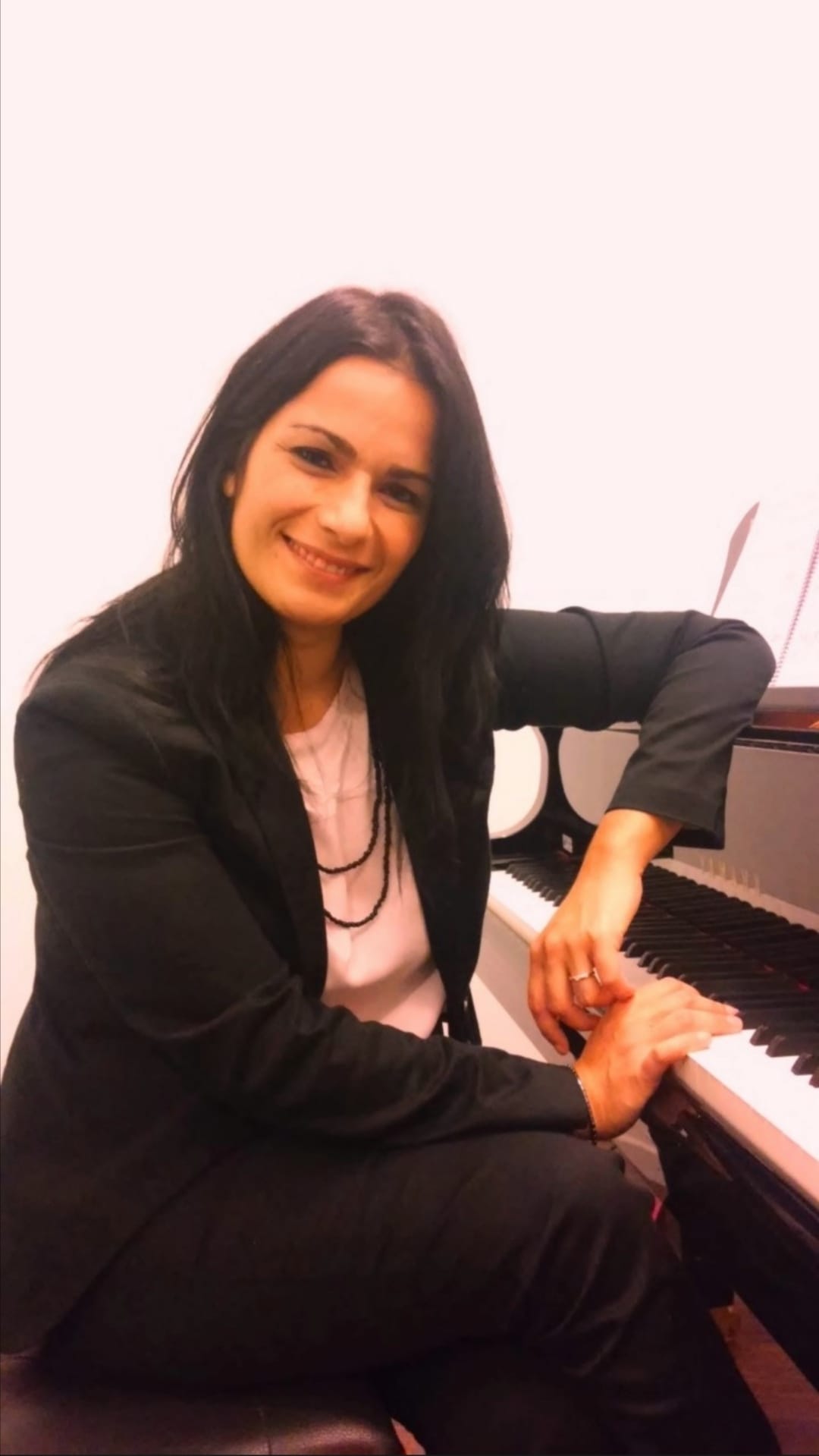 Vanessa Garcia is a Spanish pianist, best known as an extraordinary accompanist. She currently works as a vocal trainer and accompanist at the Gran Teatre del Liceu (Barcelona).

Vanessa Garcia has performed on various occasions as a soloist at the Palau de la Musica and with the Gran Teatre del Liceu in Barcelona.

He is currently preparing for several recitals by world singers in leading international opera houses.

Art is calling for me / I want to bea Primadonna

Arlen Harold : THE WIZARD OF OZ